The topic for this month’s blog round robin is: Does travel change you?

Everyone says they love to travel, or want to travel more. I don’t think I know anyone that’s actually anti-travel; they may just be anti flying or staying in hotels. But who doesn’t love exploring new places and adding new experiences to their life lists?

I first began traveling as a young girl, when I would fly alone from Texas and then Ohio to visit family in Louisiana each year. That was in the days when you could be brought all the way to your gate and picked up when you arrive, instead of having to drop someone at the curb. I collected multiple airline pins and buttons, and once I got to visit the cockpit in a small commuter flight. One summer, I met this wonderful lady, also from Louisiana, who eventually became my pen pal for many years until she died. Traveling was already a big part of my life by the time I hit 12 years old, and that’s when I went to Europe with my parents.

We spent most of our trip in Germany, which probably majorly influenced my decision to visit again when I was 25, as well as to study German in high school and college. We hiked and visited small towns, and then also went to Dachau and Hitler’s mountain hideout, Eagle’s Nest. At the time, I was in the midst of my fascination with WWII and the Holocaust, so it was a great learning experience, at just the right age. (Although it did spur bad dreams for years after that.) After that trip, my parents and I went to Canada a couple of times, took a Caribbean cruise, and and visited the Grand Canyon, American Revolution and Civil War battlefields, Colonial Williamsburg, Jamestown, DC, and more. (DC was the trip that made me decide to move there someday.)

Then in 2011, I went to Costa Rica by myself on a G Adventures tour, and met up with a group of other young folks looking to enjoy the rainforest and beaches on a budget. It became my new favorite vacation ever, what with the surfing and the waterfall rappelling, and the ziplining. I even made new friends out of it that I remain in touch with today. In 2012, I joined my parents on another G Adventures tour, this time in Southern Tuscany. Then that  became my new favorite vacation ever, what with the wine and the food and the old ruins and the countryside (did I mention the wine?).

Looking back on all of the places that I’ve been, and thinking about the places I have yet to visit, I realize it’s not so much the travel that changes you — it’s the creation of new memories with all five senses, connecting with family or loved ones or new friends, and the realization that there is so much more to life than how we usually live it. And while things like ziplining and such are often quite exhilarating and memorable, what’s more awe-inspiring and a source of reflection are the other, quieter, simpler moments: standing over the rim of the Grand Canyon and marveling at nature, sharing a laugh with my parents while making homemade pasta in Italy, looking out over Antietam or Gettysburg and being thankful that our country survived civil war, walking through a concentration camp and mourning millions of lives loss due to hatred and fear. I am also changed by the moments that push my limits and challenge me in far off and unknown places, and then by the feelings of pride and independence after navigating through it all learning something new at the same time.

So many people will never have the opportunity to leave their hometown. I am privileged to have gone to some amazing places, and that I will be able to add to my travel experiences in the future. I am thankful to be changed by travel, and hope that get many more chances for it to happen again.

To read the rest of the responses to this month’s round robin question, visit the following blogs (and come back in a month for the next topic):

Next up in the #BeFearless series, my friend Sarah, who works in online communications at the National Trust for Historic Preservation. You can read more of her stories at her blog, QueSarah.net.

A little more than five years ago, an amazing opportunity was presented to me: a chance to go to Thailand for work, to do a press check on a book we were publishing. My boss agreed to my request to take a couple of weeks of vacation there after my responsibilities were finished, and I got to planning my trip. I had little advance warning (just a few weeks) and quickly realized I’d be going alone — none of my friends could get time off from work on such short notice. Undeterred,  I reserved hotels in Bangkok and Chiang Mai and researched the train schedule that would get me between the two. I booked a flight to Siem Reap in Cambodia to see Angkor Wat, not knowing if I’d ever be so near again. As far as I was concerned, I was planning the trip of a lifetime.

And it was, without a doubt. But even before I left home, I noticed a recurring theme from a lot of the people I told about the trip: amazement that I was flying halfway around the world, to a county that had just experienced a coup, alone. I was told it was bold, and brave, and fearless. Once I was there, everyone seemed shocked to meet an American woman traveling alone in Asia. (Apparently, it would have been less stunning if I were European, or perhaps Australian.) I was such a novelty that a group of Buddhist monks in Cambodia wanted to have their picture taken with me, to prove that they had seen such a thing.

Not surprisingly, I found this hilarious, and more than a little strange, because it hadn’t occurred to me that making the trip required any sort of fearlessness until people started mentioning it. I wasn’t afraid to be making the trip, therefore, I wasn’t being fearless — I was just doing what I wanted to do.

I don’t remember exactly when or how I developed that attitude — I just know that at some point I realized that being afraid was an incredibly lame reason not to do things I wanted to do or see places I wanted to see. From that point on, whenever I would hesitate to do something because I was fearful, I would remind myself that fear was, for me, not an acceptable out, and I would force myself to do it. Eventually, I got to the point where I needed a reminder less and less, because I at some point I stopped overcoming fear and just stopped being afraid.

Mostly, anyway. I’ve got it narrowed down to spiders, heights, and walking up to strangers and saying hello. And I’m working on those. Well, not the spiders. I don’t think being afraid of them is negatively impacting my life in any way. 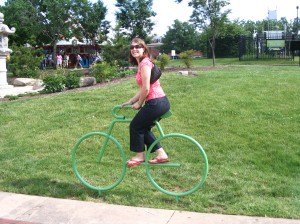 After weeks of waffling between cold rains and random warm days, it seems like summer is pretty much officially here in DC. We’ve had a stretch of days with temperatures into the 80s, humidity first thing in the morning, and hot breezes into the late evening. Here we go!

Summers hold some of the best memories for people everywhere, whether you get them off, or slog through them with some breaks in between. Summers are chock full of things to do and memories to be made. Here are a few of my favorite summer moments from over the years…what are some of yours?

Recently, I wrote about making a dedicated effort to try new things to have a little fun, expand upon a skill, or to step out of your comfort zone. Whether you’re trying new things or indulging in old favorites, stopping to smell the roses and enjoy life is something we all advise, but many of us rarely put into practice.

I was chatting with a friend last week who is nearing 40, is single, and doesn’t have any children. And here I am, 26, and a year ago or so, I thought I would be getting married around now (a lot has changed since then!). As we recalled how we had both attempted to either set a path for ourselves in our careers and relationships or avoided one assuming things would work themselves out, I was reminded that life is short, and more often than not, we have to just go for what we want.

END_OF_DOCUMENT_TOKEN_TO_BE_REPLACED

This weekend I was in New York City for some work events. It was my fourth time to the city, yet every time, I have always gone in for work and left without really doing anything fun or exploring on my own. This time, I was determined to change that. Originally, my trip called for me to come in Thursday morning, and leave Saturday morning. But at the last minute, I decided to stay over on Saturday (no work events that day), and come back on Sunday. I’m sooo glad I did.

Now I didn’t go tourist crazy and see the Statue of Liberty, or a show, or anything like that. But I still had a handful of experiences that were pretty fun considering this was my first time hanging out in the Big Apple…